Keep your friends close and your enemies closer. Isn’t that what they say? But how close is too close when they may be one in the same?
The Seven Stages War left much of the planet a charred wasteland. The future belongs to the next generation’s chosen few who must rebuild it. But to enter this elite group, candidates must first pass The Testing—their one chance at a college education and a rewarding career.
Cia Vale is honored to be chosen as a Testing candidate; eager to prove her worthiness as a University student and future leader of the United Commonwealth. But on the eve of her departure, her father’s advice hints at a darker side to her upcoming studies--trust no one.
But surely she can trust Tomas, her handsome childhood friend who offers an alliance? Tomas, who seems to care more about her with the passing of every grueling (and deadly) day of the Testing. To survive, Cia must choose: love without truth or life without trust.

There has been so much buzz about THE TESTING so I’m excited that I was able to receive an ARC to review and share my opinion with everyone before the book comes out on June 4th! If you’re a long-time reader of my blog, you probably know that the whole reason I even got into YA was because I was dying for more dystopians. I was in a huge dystopian kick with books like The Hunger Games, Matched, and Delirium so you can image how excited I was when I heard several comparisons that THE TESTING was the next Hunger Games!

I will say that I can’t deny the similarities I noticed between THE TESTING and THG. Yes, it is dystopian so, okay, there will be elements in there that the “classic dystopian” will most likely contain, but I’m not talking about those. The thing that stood out to me most was watching Cia, our main character, be taken away from her family to participate in “The Testing” which if you’re not familiar with the summary is a series of rigorous mental and physical tests/situations to determine if the United Commonwealth’s smartest teens are worthy enough to move onto the University and be groomed as the nation’s next group of leaders. Where I saw the similarity and just couldn’t shake it was seeing a sort of “first half” where Cia is figuring out secrets about The Testing and getting to know her fellow candidates and a “second half” where they are all out in the “field” so-to-speak (which I likened to the arena in THG) and the students decided whether to work together or battle against each other. I can’t really say whether it was good or bad that it reminded me of THG. On the one hand, it was a book that I truly loved (still do) and both books had great female heroines and exciting action! On the other hand, I couldn’t get that comparison out of my mind and it made me feel like the story was a tiny bit unoriginal. Hard to say since so many dystopians will seem similar just because they share genres!

I really did enjoy all of the action in this book. There were some extremely tense moments, although I wish some were drawn out longer, and some shocking twist of events. The Testing is designed to truly put these kids through the wringer so it brings out the best in some and the worst in others and at times I was truly surprised to see people’s true colors!

Honestly, my favorite aspect of the book was the mind games between the Testing officials and Cia. Cia’s intelligence level is probably the highest out of all of the kids based on her assessments of the officials as well as her fellow Testing candidates. Those little twists and turns in the plot were really the most exciting part for me! No spoilers of course, but the ending totally hooked me in and has me anxiously awaiting book two! Upon finishing, I was actually really glad it ended the way it did. The ending could have gone two different ways, and in the first, I think it would have closed the book off and made for a more wrapped-up ending. The way the book actually ended definitely kept me on the edge of my seat and in anticipation of the rest of the series! I truly have no idea what is to come!

I think dystopian fans will enjoy this one! If you’re looking for a comparison, I totally saw it as a mix of the feels from The Hunger Games and Divergent. Strong stuff, right!?

Cia: To be brutally honest, Cia is no Katniss for me, but I loved so many things about her. One thing that really got me was her truly honest and genuinely caring personality. True, she may have been a bit naive because of it, but she stayed true to her character the whole book and it created a lot of interesting situations when your characters is trusting of her peers in situations that she maybe shouldn’t be!
Tomas: Tomas was Cia’s friend from back home in Five Lakes and is our main romance in the book. One thing I really liked about him was how his character — in Cia’s eyes — was constantly changing. Cia knew him from home, but he wasn’t a really close friend until they started up their whirlwind romance in the Testing. It’s interesting to see Tomas through Cia and try to figure out all of his little secrets!

I enjoyed the book… buuuut it felt a bit TOO Hunger Games-y for me. I had fun reading it but I’m not 100% sure about the trilogy… 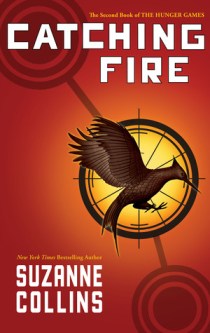