Emma has just learned that her mother is a long-lost Poseidon princess, and now struggles with an identity crisis: As a Half-Breed, she’s a freak in the human world and an abomination in the Syrena realm below. Syrena law states that all Half-Breeds should be put to death.
As if that’s not bad enough, her mother’s reappearance among the Syrena turns the two kingdoms—Poseidon and Triton—against one another. Which leaves Emma with a decision to make: Should she comply with Galen’s request to keep herself safe and just hope for the best? Or should she risk it all and reveal herself—and her Gift—to save a people she’s never known?
Once again, Anna Banks infuses Emma and Galen's points of view with humor, intrigue, and waves of romance.

Anna Banks has done it again! I fell in love with this mermaid — sorry, Syrena — world and the characters in it. OF POSEIDON was such an enjoyable read for me and I admit that I was a bit afraid to jump back in with OF TRITON for fear that it wasn’t going to be as good. Nowadays, I live in fear of sequels and series for fear that the next book just won’t live up to the first. In many ways, I think OF TRITON was actually better with more established characters, more complicated story lines, and a few shocking moments of its own!

I think the thing that really set OF TRITON apart from its predecessor was that now that we have the Syrena world all established, we can really dive into the politics and laws that govern our characters. Now I’m not one for politics, but the way the Syrena laws drove these story lines was fascinating! It seems all of the characters are tangled and caught in the webs of the laws and they all have to find a way to regain power, establish control, duck around the laws, or create new ones.

And of course, the driving force behind THIS, of course, is love. We’ve got a ton of pairs in this book. First, there’s the Galen and Emma story. Their romance is the steamiest of course and there were quite a few moments when Galen got my blood boiling as well as Emma’s (in a good way)! We have the old yet new romance of Grom and Nalia and the new struggle that they must face of how they can possible get back together when Nalia has supposedly been dead all of these years. Then lastly — which involves two of my favorite characters — is Toraf and Rayna. I love Toraf’s humor and sarcasm but at the same time how attentive he is to Rayna. He’s able to show sensitivity yet handle her fiery nature all at once. They’re definitely my favorite of the bunch! Although yes, yes, of course I love Galen and Emma too!

I also loved getting to see more of some of the secondary characters. Toraf and Rayna were prominent in book one but I feel like they had much more of a story line in OF TRITON and their own personal plot that also intermingled with Emma and Galen’s. We get to see so much more of Emma’s mother, hear more about her past, and get to see her in a totally different light. We always knew Emma took after her mother, but now we get to see some of that ferocity from her as well as Emma! And lastly, we spend a lot of time in the water with various other Syrena. I really enjoyed seeing different aspects of Syrena life, their laws, and new characters that surprised me on so many levels!

OF TRITON leaves us with several high points, but also one shocking moment that took my breath away. Anna Banks left us with one whopper in OF POSEIDON but OF TRITON closes with a whole different type of shocker and that was honestly one place I did not think the book would go. In a way, I was upset but in a way, it gave the book a little extra dash of serious and drama. I thoroughly enjoyed it and devoured the book in a single afternoon! Lots of action, adventure, and romance in this one and I think fans of OF POSEIDON will not be disappointed!

Emma: Emma is back with all the spunk of book one! She’s got a lot more on her plate with this book (not like finding out you’re half mermaid isn’t a whopper, but still) and with her budding romance with full-blood Syrena Galen, Emma now has to deal with her mother’s shocking history as well as finding a way to keep her boyfriend without his own people keeping them apart. I do have to say that I still lover her spunk and fiery determination above all else! I’m glad that she stayed so true to her character — very strong and determined with just a dash of teenage naiveté.
Galen: Still serious. Still swoony! What more can I say?
Nalia: LOVED finding out so much more about Nalia in this book. After the bomb was dropped in book one, it was so great to get into that history and how everything will changed based on this brand new information!

I think I enjoyed this book even more than the first. It was a lot of fun, great twists, and love the romances! 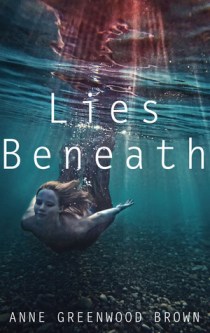