Trapped in a superstore by a series of escalating disasters, including a monster hailstorm and terrifying chemical weapons spill, brothers Dean and Alex learned how to survive and worked together with twelve other kids to build a refuge from the chaos. But then strangers appeared, destroying their fragile peace, and bringing both fresh disaster and a glimmer of hope. Knowing that the chemical weapons saturating the air outside will turn him into a bloodthirsty rage monster, Dean decides to stay in the safety of the store with Astrid and some of the younger kids. But their sanctuary has already been breached once... Meanwhile, Alex, determined to find their parents, heads out into the darkness and devastation with Niko and some others in a recently repaired school bus. If they can get to Denver International Airport, they might be evacuated to safety. But the outside world is even worse than they expected... Monument 14: Sky on Fire is the second installment Emmy Laybourne's thrilling series.

I’ve been anxious to read SKY ON FIRE pretty much since I finished MONUMENT 14. I enjoyed MONUMENT 14 so much, but I won’t hesitate to say that I wasn’t 100% happy with the way it had ended. At first, I actually thought M14 was a stand alone so I was surprised to find out it was a series and the ending was not resolved BUT I was happy that when I started SKY ON FIRE, it totally kicked off in the right direction.

Firstly, we get two different point of views: One from our original main character Dean, who is still back at the store and then we get a second POV from his brother Alex who is out in world which is currently in chaos around him. Thinking on it, I don’t know who the second POV would be BUT Alex, but I’m glad both narrators were kept as male voices instead of alternating between male and female. I’m honestly starting to believe that switching back and forth between male & female voices within the same book is not one of my favorite things, but this was the first time I’d really seen two male voices in YA since I don’t read as many… “boy” books or even YA books with any male as the protagonist. It’s just so often female that the whole MONUMENT 14 series is kind of refreshing in that way. This may be me putting this stereotypically, but I liked that it was sort of a step back from the extreme emotional side of what I usually pick up on with female narrators and instead was more action-based and to-the-point versus lyrical or beautiful prose. These guys are not trying to impress anyone, but their point is made all the same!

So SKY ON FIRE is only 212 pages. It’s a quick read, but it’s jam-packed with action so I was constantly engrossed in one occurrence or another. That’s not to say that there are zero emotional moments. We see kids trying to get back to their families, touching moments when they help out one another, and of course the fear and sadness that goes along with the disasters and consequently panicking of others around them. Things get intense many, many times over. I actually really liked that the book was short and to the point, just like these two brothers are. I think the action was well done in just over 200 pages and things weren’t drawn out just to get a higher word count. It’s refreshing to read a shorter book every once in a while and SKY ON FIRE fits perfectly just the way it is.

** This is where the spoilers come in if you haven’t read book one yet! If you want to avoid spoilers for book one, skip on down to the Character section! **

So let’s talk about plot. This is where I dock some points. Don’t get me wrong — I’m not docking any major points here, but I’ve never really been a fan of the way the Dean/Astrid romance develops. I just think the fact that Astrid is pregnant is just kind of unnecessary considering everyone may die from toxins or people who have turned psycho from toxins. I also wasn’t a fan of it because I feel like these books can easily extend down to a lower age to include some middle grade readers, but the relationship and occasional sexual content (although mostly mild) in the books just doesn’t seem to fit. To me, it chops the story up into a totally different frame of mind and it just doesn’t seem to go with the overall plot and feel of the story. I would have MUCH preferred if it was Dean just getting to know the “girl of his dreams” a little better because of the disaster and then they end up together. The development of their “relationship” in the first two books just seemed like it happened really quickly for them as a couple and it just never felt on pace with the rest of the book. Maybe it’s because this series includes a number of younger kids as well? I think those “little kids” are bringing the age feel down for me so that content in the book just didn’t seem like it belonged.
On the flip side, I think Alex’s story was totally the way to go. Okay, so Alex is only thirteen whereas Dean is… I want to say seventeen? So Alex having a major romance in the books doesn’t quite fit. That’s why I liked that his scenes with girls in the story is just a hint of flirting here, a kind gesture there, and nothing diving into kissing and sex and love when there is just SO many other things going on in their lives right now. Meh. Just my opinion!
I DO like all of the action as far as survival scenes, fight scenes, and general destruction of Colorado. (Sorry, CO. I actually really do like you as a state!) It’s more of just the romantic aspect that kind of bothered me…

I really enjoyed SKY ON FIRE and was actually happy that this was a short book — Not because I wasn’t enjoying it (I totally did) but because everything was nice and concise. I still had a few hang ups, but nothing that took away from the book overall TOO majorly. I did feel like SKY ON FIRE was just a bit more intense with both the romance and the violence. It’s definitely turned up a notch! Another good book in the series and I’m anxious to see where we go from here!

Dean: Hmmmm. What do I feel about Dean. I actually didn’t feel like he had a ton of depth. Whether that was a male character thing or just a character development thing, I’m not sure. He’s not supposed to be some deep, emotional guy but at the same time, I wanted to connect with him just a bit more. Despite the fact that half of this book is directly happening to him, I still felt like he was a bit removed from the story somehow.
Alex: I feel like Alex actually comes off as a lot more sensitive. Is the the age? Is is because he is more sensitive? Is it because his chapters are in the form of letters back to Dean? I’m really not sure. I just felt a distinct difference between the two brothers, but I’m not sure if that came off how it was intended.
Sahalia: Confession. I almost entirely forgot everything about Sahalia’s character after the first book and then struggled for just a little bit to remember who she was in SKY ON FIRE. That memory came back pretty quickly, but that also made me think… She was actually one of the characters who really stood out for me in this book. I feel like she went through a lot (obviously), did a lot of growing up, and was one character who really started to make some changes and grow up. She kind of became one of my favorites! 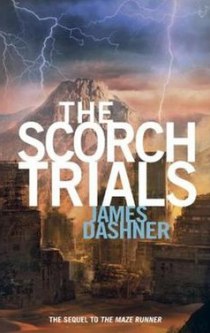