Bailey wasn’t always a wild child and the black sheep of her family. She used to play fiddle and tour the music circuit with her sister, Julie, who sang and played guitar. That ended when country music execs swooped in and signed Julie to a solo deal. Never mind that Julie and Bailey were a duet, or that Bailey was their songwriter. The music scouts wanted only Julie, and their parents were content to sit by and let her fulfill her dreams while Bailey’s were hushed away.
Bailey has tried to numb the pain and disappointment over what could have been. And as Julie’s debut album is set to hit the charts, her parents get fed up with Bailey’s antics and ship her off to granddad’s house in Nashville. Playing fiddle in washed-up tribute groups at the mall, Bailey meets Sam, a handsome and oh-so-persuasive guitarist with his own band. He knows Bailey’s fiddle playing is just the thing his band needs to break into the industry. But this life has broken Bailey’s heart once before. She isn’t sure she’s ready to let Sam take her there again…

DIRTY LITTLE SECRET was just the contemporary I needed! A super cute guy, a swoony romance, family drama and MUSIC were the perfect recipe to create just the contemporary I was craving! Don’t be fooled by the title — First, this is not about The All-American Rejects (I honestly cannot get that song out of my head when I see this title) and this isn’t a romance novel (Bailey is actually more of the “dirty little secret”, not her having one).

The book starts off with an angsty Bailey living with her grandfather after her parents have left with her younger sister Julie who is working on a record deal and nation-wide tour. Bailey essentially becomes the family’s “dirty little secret” when her parents force her to stay out of the spotlight and essentially forbid her from performing — which she and Julie used to do together — for fear that the media will find out that she and Julie used to be a duet and now are not OR that Bailey will go off the deep end and ruin Julie’s image by being the crazy sister. But when Bailey meets Sam at a mall performance that her grandfather hooked her up with… Things all start to change.

Sam was a major swoon-factor in this book for me. He just oozes that kind of confidence that makes you want to drop whatever you’re doing and follow him to the ends of the earth… You know, the dangerous kind of confidence. He seems like he could be a lady slayer which is something Bailey has to be cautious about, but he says all the right things and flashes that gorgeous smile (Well, at least how I’m picturing this in my head…) and I’ll tell ya, I totally fell for him. Things get difficult for Bailey when she has to decide whether to play music with Sam — or even trust him in the first place — or to stay quiet and keep her head down until college. I really liked Bailey’s character because as rough of a time as she’s having now, you can tell that she really did respect her parents before things started going south so it really is a hard decision to obey their somewhat unreasonable wishes or to do what she really has a passion for in life. (Music… not Sam. Haha!)

I really enjoyed the romance that developed between the two characters. It was an instant attraction and yes, things technically moved quickly but it really didn’t feel like any kind of insta-love or anything. Sometimes you just meet someone and you’re instantly crushing; the more you get to know them, the more you like, and that’s exactly what this felt like. It wasn’t exactly a slow burn, but it wasn’t jumping in too quickly either so it was a nice balance, in my opinion!

I. Loved. The music aspect. The book takes place in Tennessee, specifically Nashville so we’ve got country music galore in this book. I actually really don’t like country music, but that never fazed me once while reading — In fact, the ambience of the book actually made me want to go to Nashville! Bailey is a fiddle player (which is awesome) and she’s an extremely talented musician in part because she has perfect pitch. I was no music major or anything, but being a huge choir nerd in high school and college, I took Music Theory so it was fun just seeing some of the more technical terms that Bailey used to talk about music, chords, and tuning (which I’m sure most musicians will easily identify with as well).
Besides that, I just loved all the performance scenes in the book. Seriously, Jennifer Echols made me want to go to Nashville and see these cover bands play in a bar. I love seeing any band play live — I love the feel of being there, watching the musicians play & really enjoy what they’re doing, and sharing it with other people. I really felt like I was THERE by reading this book and it was just so much fun to live that without actually being there.

The only small complaint I have about the book was the very end — It wasn’t bad at all, don’t get me wrong, but sometimes books wrap up just a little too neatly… I actually really liked the way it wrapped up in the end, but for the amount of back and forth and conflict in the novel, parts of it felt just too sunshine-and-rainbows and it was a little TOO nice. I just wanted the end to be a touch more realistic where not everything works out perfectly. Other than that, I loved the romance, loved the music, and really enjoyed the characters as well!

Bailey: I really felt for Bailey. I was so incredibly curious in the beginning of the book to find out how she ended up so broken and self-destructive… But as the book goes along, Bailey opens up (to the reader first and then to Sam) and we find out what really happened to her… Honestly, I was expecting something much worse, but I’m also not diminishing her pain! I really enjoyed digging into that emotion with her and I can understand why she feels bad. I really liked seeing her come out her shell and I LOVED her musical ability!
Sam: Sam was super duper swoony in the beginning… and then he did ONE thing that almost made me strangle him. I understood it though — even if I didn’t agree — and regardless he was still swoony. THOSE KISSING SCENES. Omg. He stole my heart.

I really, really enjoyed this one. It totally surprised me since for some reason I didn’t think I’d get into the country scene but it was fantastic! I just really connected. 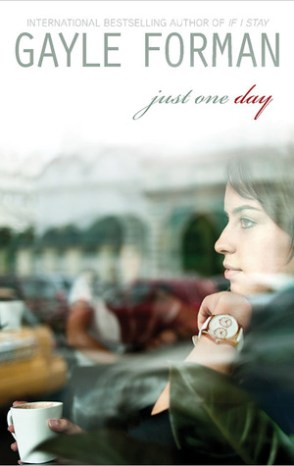