Here are the numbers of Ann Galardi’s life: She is 16. And a size 17. Her perfect mother is a size 6. Her Aunt Jackie is getting married in 10 weeks, and wants Ann to be her bridesmaid. So Ann makes up her mind: Time to lose 45 pounds (more or less) in 2 1/2 months. Welcome to the world of infomercial diet plans, wedding dance lessons,  embarrassing run-ins with the cutest guy Ann’s ever seen—-and some surprises about her NOT-so-perfect mother. And there’s one more thing. It’s all about  feeling comfortable in your own skin-—no matter how you add it up!

45 POUNDS (MORE OR LESS) was a really fun book for me to read! I feel like I haven’t seen a lot of weight issues/themes in YA books for whatever reason, but back in the day (you know… like, a year or two ago) when most of what I read was a cozy mystery or “chick lit”, I feel like soooo many of them dealt with an overweight protagonist or a girl that was struggling with her weight in one way or another but I never really saw that in YA and yet, it’s still something that a lot of people can relate to regardless of age. Ann just has one more thing to deal with as she goes through those crazy times that are the teenage years and it turns out that her appearance and self-image really affect her personality as well as her relationships in a big way.

The thing that stood out the most to me in 45 POUNDS was the fact that the book addressed several serious issues and yet I left it with a light and happy feeling. K.A. Barson does a great job of keeping a good balance between serious and comedy and she pulls it off flawlessly. For me, it was definitely reminiscent of Meg Cabot’s adult books (which are shamefully the only ones of hers I’ve read so far) like the Heather Wells series (minus the mystery aspect).

Another thing I really loved was Ann’s new friendship with Raynee. Raynee doesn’t seem like the obvious BFF for Ann… She’s one of the “Knees” (RayNEE, CourtNEY, you get it…) who are all popular girls so I was very pleasantly surprised when we get to see one of the popular girls as a nice girl and not an enemy (although someone else does take that role). I loved how Raynee was truly a good person and a good character and I didn’t have to worry about her backstabbing Ann later on because she wanted to stay with the popular group. That was like a safe place and some great support that Ann really needed and I was so thankful for Raynee’s character and her relationship with Ann!

Ann’s family on the other hand… I had a love-hate relationship with them. She’s got a wacky grandmother (always a fun time!), her overbearing mother (who really means well but doesn’t know how to do it right), and an absent brother who she used to be close with. I actually expected a lot more from her brother Tony, but he didn’t play as big of a role as I thought… But there was no lack of family in this book! Ann has her grandmother, her mother, her step-father, her half-siblings, her father, her step-mother, her step-siblings, uncles, AND aunts. It’s quite a family event! It did get a tiny bit confusing at times (mostly with the younger siblings and their ages/which parents they belonged to), but it didn’t draw away from the book.

There was also a bit of romance, but honestly… I kind of loved that it wasn’t the MAIN focus of the book. Yes, Ann does end up crushing on a boy, but she has plenty of her own stuff to sort out first and I say good for her!! I was really happy to see her working on herself first and then the boy was kind of a bonus.

I really enjoyed 45 POUNDS (MORE OR LESS) and I think a lot of other people will too! It was serious yet funny and I really loved Ann’s character. K.A. Barson made it easy for us to root for her and identify with a lot of things she goes through as well!

Ann was such a likable character for me! I felt like I was her own personal cheerleader in this book. I liked her, I related to her, and I really appreciated the journey that she went on throughout the course of this book! I like that even in the moments when she was struggling — a lot — she still had a sense of humor (although maybe it was just sarcasm!) and her inner monologues were definitely entertaining!
Raynee // Character Obsessions: Fashion? Not much that I can think of!
I loved Raynee. She was such an awesome friend for Ann when she needed one most. After drifting apart from her current best friend, Raynee’s friendship with Ann developed naturally and at the most opportune time. She was just a genuinely good person and I was so happy to see her character in this book.

Kept Me Hooked On: Main characters I can be a personal cheerleader for. It wasn’t an easy road for Ann, but I was actually PROUD of her for attaining some of her goals and just being happier with herself overall in the end! I love reading books where the character truly changes their life my changing their attitude and things just fall into place from there. I loved the feeling of being proud for Ann! It made the ending that much better.
Left Me Wanting More: Family Ties. There was no shortage of family members in the book… But the amount of them was just the tiniest bit overwhelming! I also wanted Ann to have maybe a good, strong relationship with at least one of those family members. She was really close with her grandma, but I wanted them to show that bond juuuuust a tiny bit more. I think I was just sad that her brother wasn’t that strong connection for her any more! I love older brother figures for some reason so I still wanted that brother-sister bond.

I really, really enjoyed this book and I think it has a great message! It touches on higher and lower points of Ann’s life. I think a lot of people can relate with at least one aspect if not most! 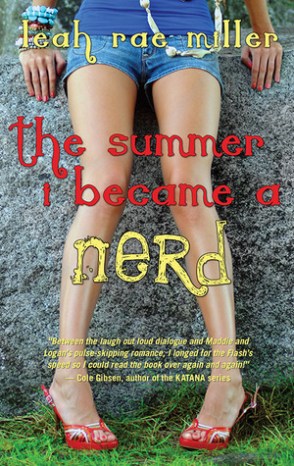