Being permanently based in a local New York City high school as an undercover operative has its moments, good and bad, for 16-year-old safecracker Maggie Silver.
Pros: More quality time with her former mark-turned-boyfriend Jesse Oliver and insanely cool best friend, Roux.
Getting to spend quality time with her semi-retired and international spy honorary uncle, Angelo.
Cons: High school and the accompanying cliques, bad lunches, and frustratingly simple locker combinations.
But when Maggie's parents are falsely accused of stealing priceless gold coins, Maggie uses her safecracking skills to try and clear their names.
Too bad it only serves to put her and everyone she loves in danger. Maggie and her "new team" flee to Paris where they must come up with a plan to defeat their former allies.

I know that Robin Benway hadn’t always planned on writing a sequel to ALSO KNOWN AS but boy am I glad she did! GOING ROGUE was just a perfect sequel in every way: I got more of the characters I love, more action, more adventure, and thicker plots.

One thing I always fear about sequels is that if it’s been a while since I’ve read book one, I tend to forget some of what happened and even some of the characters, but Robin Benway did such a fantastic job with ALSO KNOWN AS that it was so easy to jump back into the lives of these characters right where we left off. These characters have made a lasting impression on me and reading even more about them in GOING ROGUE just further solidified their place in my heart. I love Maggie, of course, but Robin Benway does such a great job with her supporting characters and we even get a little bit more backstory about Maggie’s parents as well! The characters just feel so real and it made me that much more invested in the story!

GOING ROGUE really stepped it up from ALSO KNOWN AS. I was already in love with AKA, but we see a lot more action and heist and spy terms, we get a little bit more Jason Bourne to go with the already established Ocean’s 11. Spying is a dangerous job and we see a lot more of the perilous side in GOING ROGUE which may have led to some gasping and screaming on my side. Aside from my fear and concerns for the characters, I was so excited to see the level of action that occurs in GOING ROGUE and I’m glad we got to see totally different situations than we had in book one! I really wasn’t expecting it, but in a good way! I was surprised by how different this book was and it definitely keeps up the witty dialogue of ALSO KNOWN AS with an added bonus of more thrills!

I know I’ve already talked about the characters but seriously. Maggie. Roux. Jesse. ANGELO. How much did my love for Angelo grow in this book!? (Spoiler: A lot.) I know everyone loves Roux (and I do too) but Angelo has always been my favorite. I was also really excited to learn more about Maggie’s parents as we dig deeper into the Collective! We get a lot more backstory for both the characters themselves and how that ties into their history with the Collective and the new characters we meet are just as delightful!

Fans of ALSO KNOWN AS will not be disappointed with its sequel. It had made for a wonderful stand alone but I’m so happy its sequel came into existence (Thank you, Robin Benway!!!) and I’m hoping there will be more books in this series because I could honestly gobble them up forever! I guess that means I’ll just have to start onto Robin’s other books (Right? How have I not already??) to hold me over until then!

Maggie // Character Obsessions: Cracking safes, working on the impossible lock, protecting her family, taking down the bad guys.
I’ve always love Maggie’s spunk and we get another healthy dose of it in GOING ROGUE! She also starts to mature a lot more — in her relationship with Jesse, in her friendship with Roux, her protectiveness of her family, and her responsibilities to keep everyone safe. Maggie has a lot on her plate and she’s learning how tough it can be to balance everything and still maintain the secrecy of her nature as a spy.
Angelo // Character Obsessions: Secrecy, protecting Maggie’s family & friends, being a total badass.
Angelo is such a badass. He has this quiet calm, always keeping a level head and totally TCBing without anyone even knowing where he is or what he’s doing. I love when the quiet characters totally step into a take-charge role to protect someone and not giving any spoilers away or anything, but Angelo will go to great lengths to protect the ones he loves, no matter what that means. If I were the Grinch, Angelo is the one who makes my heart grow three sizes. I wish I knew him in real life.

Kept Me Hooked On: All things Robin Benway! I absolutely MUST devour the rest of her books this year! I love her writing, both the contemporary/funny/witty side and the spy/heist/caper side! I know her other books are more strictly contemporary but I’ve heard NUMEROUS great things about them and I seriously need to read them in 2014!
Left Me Wanting More: Of this series. I need more Maggie, more Roux, more Angelo. I need more safe cracking, lock picking, and spying. I need more sticky situations and international espionage. I just adored both ALSO KNOWN AS and GOING ROGUE!

This one’s a keeper! Buy GOING ROGUE (and if you don’t have it already, pick up ALSO KNOWN AS too!) for your shelves. These books are so much fun and I love everything about this series. 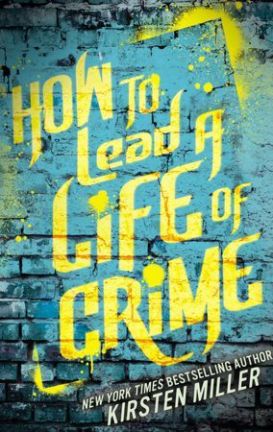