She’s not evil, but she has certain... urges.
Lane is a typical teenager. Loving family. Good grades. Afterschool job at the local animal hospital. Martial arts enthusiast. But her secret obsession is studying serial killers. She understands them, knows what makes them tick.
Why? Because she might be one herself.
Lane channels her dark impulses by hunting criminals—delivering justice when the law fails. The vigilantism stops shy of murder. But with each visceral rush the line of self-control blurs.
And then a young preschool teacher goes missing. Only to return... in parts.
When Lane excitedly gets involved in the hunt for “the Decapitator,” the vicious serial murderer that has come to her hometown, she gets dangerously caught up in a web of lies about her birth dad and her own dark past. And once the Decapitator contacts Lane directly, Lane knows she is no longer invisible or safe. Now she needs to use her unique talents to find the true killer’s identity before she—or someone she loves—becomes the next victim...

Sometimes I have a craving for a dark story. I admit that I actually never finished watching Dexter due to lack of premium channels and time (you know, reading takes priority!) and I actually only read the first book in the actual Dexter series on which the show was based because I had seen the show already and it was spot on with the events of the first book. That left things to be a bit anticlimactic and repetitive. Anyway, Dexter confessions aside, of course I was excited to hear about this new book called KILLER INSTINCT which was being described as a YA Dexter-type. Exciting, right? Well, I was very anxious to dive in to a dark, creepy, and possibly horrifying book but what I read was all together disappointing.

I’ve come off worse with disappointing books but the weird thing was that it wasn’t lack misleading advertisement that lead me to be let down by KILLER INSTINCT — it was the fact that it lived up to be exactly what it was advertised as. YA Dexter. A little too closely. Yes, yes, I understand that there are only so many ways you can really write a story from a serial killer(or in this case, an individual considering becoming a serial killer)’s point of view. My issue was that there seemed to be entirely too many direct parallels that I spotted to DARKLY DREAMING DEXTER (book one in the series) and season 1 of the TV show. If you’ve seen the show (which is probably more liking than having read the book, so it seems), you can probably spot the parallels pretty easily as well. I counted no less than four things that happened EXACTLY and there were several smaller things that lined up as well. I won’t mention them in the review in case you haven’t seen the TV show and want to read the book because they will come as a surprise — I would actually imagine this book would go much better for people who aren’t fans of the show because things may be much more surprising and entertaining. It just felt entirely unoriginal and I felt like the author could have done a better job coming up with some more dynamic scenes that didn’t follow so closely to the Dexter story line.

I’ve seen several reviews that complain about lack of connection to Lane’s character (she would be our wannabe serial killer in question) but really, that didn’t bother me. I took Lane for who she was — a girl with a darkness inside of her which often goes hand-in-hand with a lack of emotional presence in her day-to-day life. Yes, sometimes she was very awkward, but I took that social ineptitude as part of her personality as well as her different mental state. There were some very weird moments (one in particular that I can’t believe I’ve read in two different YA books, but okay), but Lane doesn’t always really think the same way that other people do and I think her lack of emotional connection to most people creates a general sense of apathy both in her personal feelings as well as how her narration would genuinely come across.

I hate to compare to other reviews and I know this will be the second time I’m doing it, but it’s a point that didn’t bother me for the same reason and I feel the need to bring it up — slut shaming. I really don’t even like the term “slut shaming”, personally, but obviously I understand people’s averse reaction to it and I noticed complaints of slut shaming in this book. Lane’s younger sister (I think she’s fifteen?) is very promiscuous and Lane actually calls her a slut in the book. This didn’t really bother me since I was in Lane’s mindset and already felt a sort of closed-off mentality towards the emotions of others and how thoughts and statements like that really affect people. I’m not making excuses for it, but merely looking at it feeling like, “Yeah, okay, I can get why if she’s thinking about killing people and making a habit of it, she probably doesn’t care about calling her sister who she doesn’t even get along with a slut.” Take that as you will, but I was not as offended by it seeing as I felt it was true to her character. Although I will say that I don’t know why her sister’s promiscuity even needed to be a part of the book. It was a bit explicit and that along with a couple other sexually explicit scenes seemed unnecessary to include. Granted, a book about a serial killer will already be geared toward and older teenage audience versus the younger groups, but even still, seemed to take things up a notch into more adult elements than young adult.

All that being said… Well, I don’t have any clearer of an opinion about this book. I’m still very torn between having finished the book in a day and racing to see how it ended and feeling of overall disappointment in how everything progressed and how it all wrapped up in the end. I feel like it was entertaining but I’m finding it extremely hard to say I would recommend it because I sincerely felt that the Dexter parallels were all too frequent, there were a few bizarre moments that didn’t sit right with me, and the ending felt downright weird. Usually after writing my reviews, I get a clearer picture of my overall feelings but this one still feels like a jumbled mess of thoughts.

*crickets* Well, this is awkward. I accidentally had two different versions of this book and deleted the one on which I had been updating as I was reading. *headdesk* I CAN tell you that there were many, many cries of outrage though. (Good story, Brittany…)

Lane // Character Obsessions: Killing, justice, satisfaction.
Lane is a tough cookie to crack. It’s obvious she has some mental instabilities from the sheer fact that she carries a darkness that supplies urges to hurt and kill. She has a fascination with her mother’s work as an FBI agent, specifically working on serial killer cases. Did I really get to know her through this book? Am I missing something? Or is that really all there is?
Zach // Character Obsessions: Dating, girls, avoiding exes, Lane.
Zach was the “love interest” here (love in quotes because of Lane’s lack of emotional connection) and seems to cause way more problems that necessary. I really could have done without the whole jealous ex-girlfriend plot and the fact that it even happened for some reason made me blame Zach. Something about him just didn’t sit right with me and I got a bad feeling more from him than Lane, actually.

Kept Me Hooked On: The darker side. I love light and fluffy contemps… But I also really love reading about the darker side every once in a while! I was hoping for a bit more from this book though…
Left Me Wanting More: Originality. Maybe I knew that first book/season of Dexter too well but the book just didn’t feel like it stood on its own two legs, so to speak. It was one of the things that really bothered me and I just couldn’t shake it because it kept coming back.

Addiction Rating
Borrow it from the library

I would recommend this as a library read, I think. I feel like some can enjoy it and others will probably feel as disappointed as I was or worse. It’s really a toss up, so the library might be the best way to go! 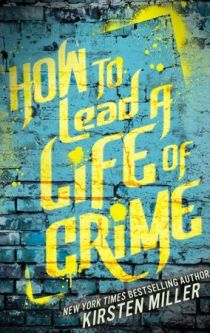