Rose Hathaway has always played by her own rules. She broke the law when she ran away from St. Vladimir's Academy with her best friend and last surviving Dragomir princess, Lissa. She broke the law when she fell in love with her gorgeous, off-limits instructor, Dimitri. And she dared to defy Queen Tatiana, leader of the Moroi world, risking her life and reputation to protect generations of dhampir guardians to come.
Now the law has finally caught up with Rose - for a crime she didn't even commit. She's in prison for the highest offense imaginable: the assassination of a monarch. She'll need help from both Dimitri and Adrian to find the one living person who can stall her execution and force the Moroi elite to acknowledge a shocking new candidate for the royal throne: Vasilisa Dragomir.
But the clock on Rose's life is running out. Rose knows in her heart the world of the dead wants her back...and this time she is truly out of second chances. The big question is, when your whole life is about saving others, who will save you?

I finished a series!!! *happy dance* Aren’t you guys proud of me!? I FINALLY finished the Vampire Academy series! It only took me…. forever. Anyway, let’s talk about it, shall we? So I started LAST SACRIFICE, and at first I was scared. Because I participated in the “Who Is Marcus Finch” campaign in the beginning of the year, therefore deciding to read ALL of the Bloodlines series (that’s out so far) before finishing VA, I was very nervous that LAST SACRIFICE was going to be anti-climactic. I guess I can say that although BL did have a few spoilers for the last book here, there were still so many things that I was excited to find out and regardless of spoilers, I still needed to see how it wrapped up!

So LAST SACRIFICE starts with Rose in prison for a crime that we know she didn’t commit, but basically everyone else in the vampire world thinks she did. Typical! The beginning was just a tad slow because obviously… Rose is in prison. We can only do so much with that for so long. Thankfully it didn’t take too long for her to get out. LAST SACRIFICE definitely kept me on my toes (once we busted out of the prison part) with the usual chases, escapes, and complete surprises that are so characteristic of the Vampire Academy series.

One thing that I really liked was thinking how Rose has grown as a person/character throughout the series. She will always be a “react first, think later” kind of person, but you can see how much she’s changed and matured to still keep her instincts at the ready, but also to allow herself to use her head and her heart in balance when making her decisions. I think many of the characters have matured nicely throughout the series, an obvious one being Lissa. Lissa has to secure her place on court since she’s part of a royal bloodline, but with no living relatives, has to find a way to do it (because for those of you who don’t know, you need that one extra relative to validate you). It’s obvious for people who have read LAST SACRIFICE and/or The Bloodlines series (since it is a spin-off series) how much Lissa really has changed, grown, and overcome in these last couple books. She’s actually one of my favorite characters from the series and I don’t think I realized that until very recently.

The Rose and Dimitri Story… The romance between Rose & Dimitri has basically been half of why I loved this series so much. I don’t know why but a good forbidden romance just GETS me. They love each other… but no! They can’t be together! Anyway… I actually felt just a tiny bit let down by that forbidden romance aspect in LAST SACRIFICE because as silly as it is to say, it just wasn’t angsty enough for me! Ultimately, okay. (This is not a spoiler because this has been my OPINION the entire series) In my mind, I KNEW they were going to end up together and yes, that’s what I wanted… But there wasn’t enough tug on my heart with the back-and-forth in this book. I will say that I’m glad the book wrapped up this romance the way that it did and it definitely had to happen in the very last book because well… It just wouldn’t be exciting if that carried on in future books! That angsty romance just lost a tiiiiiny bit of its spark for me in the last book, but who am I kidding. I still love it!

The killer twists are always a very, very favorite part of Richelle Mead’s books, but like I mentioned earlier, I kiiiind of spoiled a really big one for myself but reading BLOODLINES. *shrugs* Can’t really do much about that now, but I got to enjoy LAST SACRIFICE in a different way: After reading Bloodlines and getting a very brief idea of what happened in LS, it was actually kind of fun to “go back in time” and see how it really happened. I actually had pieces of the puzzle in Bloodlines so it was actually fun to see how those pieces came together in LAST SACRIFICE. I didn’t quite enjoy the book the way it was intended with the total shockers, but I got to almost see a different side of it and that was kind of cool too.
There were still some things that were able to surprise me that hadn’t gotten spoiled by reading Bloodlines first and then even still, there were some more moments of clarity where I would stop and say, “Ohhhhhh, I get it!” Would I recommend finishing VA before starting Bloodlines? Absolutely. But if you don’t, the rest of the VA series should still be enjoyable, but in a slightly different way.

Rose Hathaway // Character obsessions: Dimitri, kicking Strigoi ass.
I clearly never hated Rose (since I read the entire series) but I will say that she grew on me over the course of the series. I’m actually a little proud of her for maturing and starting to act like an adult in this last book. Haha, Richelle Mead really did a number on me here — I’m acting like Rose is a real person so I guess she did a really great job with that!
Lissa Dragomir // Character obsessions: Spirit magic.
I don’t think I knew it for a long time, but Lissa is actually one of my favorite characters. She was a balance of head when Rose acted with heart and she’s always had a sort of maturity about her that I really appreciate. I like how she changed in this book as well — She’s always been good with a crowd and diplomatic, but here she really owned it and started to not just be appropriate amongst the Royals, but really take charge and start acting like she really had something to fight for.
Sydney Sage // Character obessions: Work, looking presentable, responsibility.
So I’ve read all three of the Bloodlines books that are out so far and… I like Sydney more in VA than I did getting Bloodlines from her POV. The Sydney in VA is seen through Rose’s eyes, so she’s serious and focused, but also sarcastic and clearly out of her element considering she’s helping vampires. In Bloodlines we read from her POV and just allllll the insecurities I read from her stream of consciousness kind of negate the badassness that I saw so much of in VA. It was much easier for me to read her through Rose’s POV than from her own.

Kept Me Hooked On: Vampires. I realized that the books in this series were the only vampire books I’ve read since Twilight! I was “over” that phase even when I started reading VA so they’ve definitely held my interest!
Left Me Wanting More: Swoony times. Rose & Dimitri’s relationship was basically half of the fun of these books and I felt like there weren’t a lot of good swoony moments in LAST SACRIFICE!

While it wasn’t my favorite of the series, Vampire Academy will always hold a special place on my shelves. I have to round out my collection of books by completing the series! 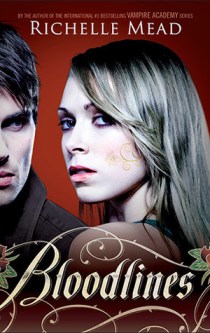