Gameboard of the Gods (Age of X #1) – Richelle Mead


In a futuristic world nearly destroyed by religious extremists, Justin March lives in exile after failing in his job as an investigator of religious groups and supernatural claims. But Justin is given a second chance when Mae Koskinen comes to bring him back to the Republic of United North America (RUNA). Raised in an aristocratic caste, Mae is now a member of the military’s most elite and terrifying tier, a soldier with enhanced reflexes and skills.
When Justin and Mae are assigned to work together to solve a string of ritualistic murders, they soon realize that their discoveries have exposed them to terrible danger. As their investigation races forward, unknown enemies and powers greater than they can imagine are gathering in the shadows, ready to reclaim the world in which humans are merely game pieces on their board.
Gameboard of the Gods, the first installment of Richelle Mead’s Age of X series, will have all the elements that have made her YA Vampire Academy and Bloodlines series such megasuccesses: sexy, irresistible characters; romantic and mythological intrigue; and relentless action and suspense.

GAMEBOARD OF THE GODS is a little bit of everything… Part dystopian/speculative fiction, part paranormal, and part romance. This was the first adult book I’ve read from Richelle Mead so I wasn’t entirely sure what to expect, but I really had a lot of fun with the book although it wasn’t entirely what I was picturing. The book takes place in a speculative future world so I was anticipating more dystopian elements, but the paranormal and mythology-based aspects played a much larger part than I originally thought. My overall view felt more like a futuristic mystery with a touch of a DaVinci Code feel!

It actually took me a little while to get into the book because I wasn’t quite sure what to expect. Instead of diving into a concept head first, I had to feel it out a lot more. Since the only books from Richelle Mead I’m familiar with are the Vampire Academy series and its spin-off Bloodlines, it was a bit of a personal adjustment to fall into a new world with new characters who were totally unrelated. Not that it was a bad thing, but after reading nine books with the same theme and characters, it’s an adjustment nonetheless! Once I finally hit my stride, I was really starting to enjoy everything!

One thing that really appealed to me was the mystery of the book. I’m a mystery girl at heart so it was almost reminiscent of J.D. Robb’s In Death series for me — a futuristic world, a good romance, and a good mystery! I think if I had known the mystery was going to be so prominent, I might have fallen into the book easier but it definitely helped rope me in! It was very well put together too. I felt like I was getting plenty of clues along the way, but not enough that it was giving away the whole ending. Looking back once I finished, it was interesting to see how things had always fit together, even when I hadn’t known they were!

Another thing that really brought the book together for me was the characters. I loved the dynamic between Mae and Justin. I wanted them to get together and at the same time, I loved Mae’s constant refusal of his advances. It was a great back and forth and despite the fact that Justin probably annoyed Mae a lot, they worked together really well. The supporting characters were great as well! Each one had their own unique personality and played important roles to the story. I never felt like anyone was irrelevant and I just got such a realistic feel from each one of them!

The only minor complaint I really had was that I wished the book had started out a little quicker in the beginning. Since I wasn’t entirely sure where it was going, I was a little lost in the beginning with who Justin and Mae were supposed to be and what their purpose was. Once I got into the groove of the book, things really started to come together and take off. The ending was great and I really loved how it set everything up for the next book, which I’m excited to get to shortly!

It took me a while to get into, but I enjoyed the book overall! I think the end really helped wrap everything up and gave me a better overall feeling.

Mae // Character Obsessions: The fight, her country, her duty.
Mae was feisty! I really liked her character and I’m also so glad we got to know more about her past and how it really came into play with the overall plot of the book. She was very complex and she didn’t often react based on emotions and yet, they still affected her a lot. It was very interesting!
Justin // Character Obsessions: Intelligence, solving mysteries, citizenship.
I liked Justin a lot! He was always making me laugh and I love when intelligence and humor come together. I think he was my favorite character! He had a lot of heart and somehow a mix of determination and laziness. He was kind of all over the place but in a good way! Definitely a lot of fun, though!

Kept Me Hooked On: The world. I love a story that has a dystopian US/North America. I wanted to learn all about the new world that Richelle Mead had created and almost wished there was some kind of Wikipedia page! I actually may go look now… I need to learn more about it!
Left Me Wanting More: Focus. As a person who goes into books blind, it was a little difficult to figure out what the point of the book was in the very beginning and I felt like it was a little bit slow to start. BUT! Things were set up for book two and I feel like that won’t be an issue in the future!

This book may not be for everyone, but I ended up really enjoying it! It was a nice mix of genres and if you like mysteries, this is a good one to jump into! So happy to see that element there! 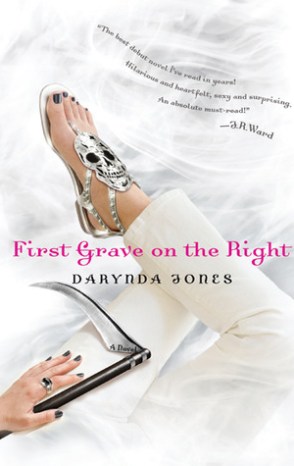