Caroline is at a crossroads. Her grandmother is sick, maybe dying. Like the rest of her family, Caroline's been at Gram's bedside since her stroke. With the pressure building, all Caroline wants to do is escape--both her family and the reality of Gram's failing health. So when Caroline's best friend offers to take her to a party one fateful Friday night, she must choose: stay by Gram's side, or go to the party and live her life.
The consequence of this one decision will split Caroline's fate into two separate paths--and she's about to live them both.
Friendships are tested and family drama hits an all-new high as Caroline attempts to rebuild old relationships, and even make a few new ones. If she stays, her longtime crush, Joel, might finally notice her, but if she goes, Chris, the charming college boy, might prove to be everything she's ever wanted.
Though there are two distinct ways for her fate to unfold, there is only one happy ending...

JUST LIKE FATE was a really fun read for me! I pretty much love anything with alternate universes/co-existing realities so I was really excited to see exactly how this story plays out. Here’s the gist: Caroline’s grandmother just suffered a stroke and as it seems her clock is ticking down, Caroline devotes all her spare time to staying at her grandmother’s bedside. When her friend calls her to invite her to a party to help lighten her mood, JUST LIKE FATE splits into two possible story lines: Whether Caroline chooses to stay with her grandmother or go to the party.
I want to say before I start my full review, though, that don’t get confused: The only people aware of these two alternate paths are us, the readers. I’m actually not 100% sure how to categorize the book since the readers are just getting two different stories none of the characters, including Caroline, are aware of the split. I felt like it was mostly contemporary but the fact that there is a split brings in a tiny element of paranormal/sci-fi so I’d be interested to hear how you guys feel about that!

I won’t say TOO much about each story line, but I will say that each option presents Caroline with different reactions and relationship-altering situations from her family, an interesting new romance possibility, and friendships put to the test. I will say that I appreciated that the two paths were in fact very different with some minor things and of course people that overlapped. When the story first split, it was a tiny bit confusing to keep the two separated because they were so similar, but as Caroline digressed in two opposite directions, we end up with different situations and different settings so things quickly solidify into separate stories.

One thing we definitely see about Caroline as reiterated by her family and friend is that she’s a runner. No, not like a track star, but she has a tendency to run and hide from her problems. Caroline seems to be running unconsciously so naturally it’s shocking and painful when that’s brought to her attention and I really think this is the way we see her grow the most. I actually liked seeing a blatantly obvious character flaw in Caroline. It was kind of nice to be shown that issue right off the bat and constantly witness Caroline’s progress with addressing conflict and standing up for herself. I think it made me that much more proud of her when I saw her making strong choices near the end of the book!

So the boys. There are two boys in this book. Firstly there’s Joel who is Caroline’s long-time crush. His relationship with Caroline is dominant in the “Stay” part of the book. Obviously we’ll all make our own opinions of Joel but I was always a bit… wary. And I think the authors made me feel that way for a certain reason. It’s all cryptic now, but of course I don’t want to give away any major spoilers! The other love interest is the new guy Chris who dominates the “Go” part of the book. Chris is a cute guy who Caroline meets at the party and he is my kind of crush! He’s snarky but sweet and you know I love that banter and joke-flirting. Personally, I was rooting for the Chris story to work out… But….

JUST LIKE FATE is written so well because each path has some serious upsides and some MAJOR issues that Caroline will have to deal with in either path she chooses, so of course the whole time I’m wondering, “Which path does Caroline actually choose and how does this story end!?!?!” I was totally itching to know at the very end. So which one does she pick? Of course I’m not revealing that answer BUT I will say that I think the end was done perfectly. Cat Patrick and Suzanne Young did a great job of closing the story in the only possible way they could have and it was a good surprise!

Caroline // Character Obsessions: Her grandmother, Electric Freakshow, Joel.
As mentioned earlier, I really liked seeing her flaws. I think that really helped me see several different aspects of her character without having to dig for them and it was that much easier to see her grow. I actually really identified with Caroline a lot. I wouldn’t say our lives are similar but I tend to avoid conflict situations so I totally understood her behavior. I really sympathized with her a lot!
Natalie // Character Obsessions: Her family, pointing out Caroline’s flaws.
Natalie is Caroline’s older sister and I feel compelled to talk about her. I was actually gonna go into listing the boys next, but Natalie just stuck out in my head and I needed to address her character. In the very beginning, we see that Natalie and Caroline do not get along. AT ALL. But I could see that so much of Natalie’s anger extended from the hurt that Caroline unknowingly caused. I really felt for Natalie and I really liked seeing so many sides of HER in these two paths. We actually get to see the many different faces of Natalie and I really liked seeing that she was just Caroline’s mean, cold-hearted older sister.
Joel // Character Obsessions: Electric Freakshow, making out, girls.
Joel is Caroline’s long-time crush and plays a big role in JUST LIKE FATE. I gotta say… I got some not-so-good vibes from this guy right off the bat. It made it REALLY hard to like him but we come to learn that there may be more to this guy than Caroline originally knows. Again, not wanting to give away any spoilers, I’ll stop there!
Chris // Character Obsessions: Music, jokes, Caroline.
Ohhh, I loved Chris. Of course he’s not without his flaws and Caroline still picks up some questionable vibes from him here and there but he was the guy that was so easy to like! He was funny, smart, a musician, confident… Everything I love to crush on in books! Of course, all of those things attract a LOT of girls soooo. You can see where Caroline might have some issues!

Kept Me Hooked On: Parallel Universes. I definitely need to read more of these kinds of books (I’ve read Pivot Point, have Tandem, and want to read Parallel) because I just love the concept!
Left Me Wanting More: Responsibility. Caroline seemed really… immature at times. Chalk that up to being a teenager, but I wanted her to show a bit more maturity (which I guess she did towards the end), but sometimes her decisions left a bad taste in my mouth.

This was an enjoyable read for me but I’m somewhat on the fence whether I’d say buy it or not… I would, however, definitely recommend it to others! 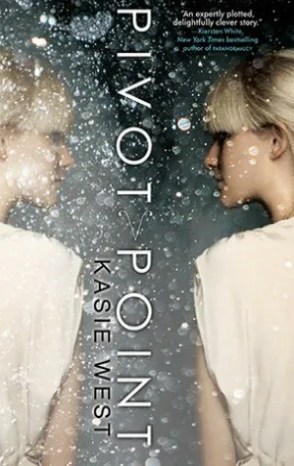